Data quality and resolution issues often remain a strong limitation to quantitative integration of seismic data into models. Nevertheless, it is worth maximizing the amount of information to be extracted from seismic data even if final deliverables of geophysical interpretation and characterization remain rather qualitative:

Whatever the operational context, incorporating seismic data into a geological model is always a question of balancing pure data-driven processes with G&G interpretation. This may be the only way to cope with seismic data limitations and uncertainties.
Our experience in conducting exploration and reservoir studies demonstrates that the selection of the approach to be applied for incorporating seismic data into basin-scale or reservoir-scale reservoir models is never neutral and has to be carefully selected and tuned: “Carbonates cannot be models with the same recipes as clastics, old seismic data cannot be handled like recent data.” This calls for a proper anticipation when selecting seismic interpretation methods and a careful analysis of various project parameters, such as:

From seismic data to stratigraphic and petroleum systems

The most common way of building basin-scale models in based on assembling maps describing the structure, the depositional environment and the lithology. In such cases, the structure is the only part of the information extracted from seismic data, which to some extent may be a limitation and certainly under-exploits the amount of information available from seismic data. Coping with such a limitation calls for additional effort on seismic data interpretation and characterization.

In recent cases with poor well control – such as Nova Scotia Margin – we have been using a dual approach mixing seismic stratigraphy and geomorphology interpretation with dedicated seismic facies analysis and massive modeling techniques:

This type of approach is now proven to be an efficient way of incorporating seismic data into basin-scale models and is routinely applied in a number of exploration projects.

From seismic data to matrix models

Reservoir characterization is typically verified on the ground by well data; however, wells are often a great distance from each other and thus provide only limited understanding of the actual lateral heterogeneity of a reservoir. Despite poor vertical resolution, seismic data is among the very few data types that provide lateral resolution in excess of that offered by wells alone.

Knowledge of the reservoir lithologies plays a critical part in identifying reservoir dynamic properties. Within this framework, defining dominant lithology from seismic data is a key and calls for rigorous step-by-step multi-disciplinary workflows:

From seismic data to fracture models

Multi-attribute seismic analysis has been widely applied to characterize the large scale fracture corridors. The most common approaches are based on combined use attributes sensitive to discontinuities. Deliverables are fracture index volumes to be used as initialization maps for the DFN. Such analysis appears to be efficient for characterizing zones affected by large-scale fractures.

When reservoirs are affected by sub-vertical joints (diffuse) and large-scale fractures, it is of the utmost importance to integrate all scales in the fracture network characterization and modeling workflows. This calls for:

Finally, seismic characterization results have to be calibrated against fracture characteristics observed at wells to generate DFN initialization volumes/maps. 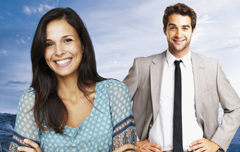